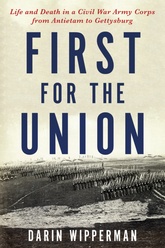 First For The Union: Life And Death In A Civil War Army Corps From Antietam To Gettysburg

Inside the Union army’s elite corps

The Army of the Potomac’s First Corps was one of the best corps in the entire Union army. In September 1862, it was chosen to spearhead the Union attack at Antietam. In July 1863 at Gettysburg, its men were the first Union infantry to reach the battle. Their valiant stand west of Gettysburg saved the Union from disaster but came at great cost. The corps was disbanded the following spring, having bled itself out of existence.

Corps histories remain one of the last gaps in documenting the Civil War. Luckily for us, Darin Wipperman has produced a monumental account of the Army of the Potomac’s First Corps. Deftly told, this is an exciting story in itself and one that is representative of the many other corps in the Union army.