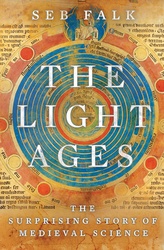 The Light Ages: The Surprising Story Of Medieval Science

In The Light Ages, historian Seb Falk takes us on a tour of medieval science through the eyes of one fourteenth-century monk, John of Westwyk—an intrepid crusader, inventor, and astrologer. From navigating by the stars to curing disease, we learn emerging science alongside Westwyk and travel with him throughout England and beyond its shores. On our way, we encounter a remarkable cast of characters: the clock-building English abbot with leprosy, the French craftsman-turned-spy, and the Persian polymath who founded the world’s most advanced observatory.

The Light Ages offers a gripping story of the struggles and successes of an ordinary man in a precarious world and conjures a vivid picture of medieval life as we have never seen it before.