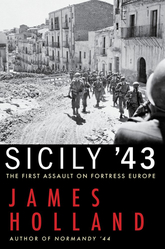 Sicily '43: The Assault On Fortress Europe

Inside the first Allied attack

On July 10, 1943, the largest amphibious invasion ever mounted took place, larger even than the Normandy invasion eleven months later: 160,000 American, British, and Canadian troops came ashore or were parachuted onto Sicily. Yet, despite its importance, very little has been written about the 38-day Battle for Sicily.

Based on his own battlefield studies in Sicily and on new research, James Holland’s Sicily ’43 offers a vital new perspective on a major turning point in the war. The characters involved—Generals George Patton and Bernard Montgomery among others—were as colorful as the fighting was brutal. A powerful and dramatic account by a master military historian, Sicily ’43 fills a serious gap in the narrative history of WWII.