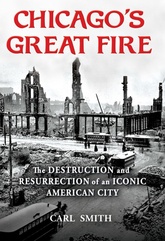 Chicago's Great Fire: The Destruction And Resurrection Of An Iconic American City

A city rises from the ashes

Between October 8th-10th, 1871, much of Chicago was destroyed by one of the most legendary fires in history. Once it began in the barn of Catherine and Patrick O’Leary, the fire quickly grew out of control. Close to one of every three Chicago residents was left homeless and more were instantly unemployed.

Remarkably, no carefully researched popular history of the Great Chicago Fire has been written until now. Crafting this story around the vivid memories of people who were there, historian Carl Smith chronicles the devastating fire and its aftermath. The dramatic story of the fire became one of remarkable renewal, as the city quickly rose back up from the ashes thanks to local determination and faith in Chicago’s future.