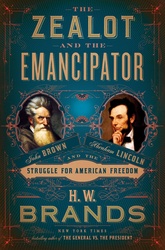 The Zealot And The Emancipator

Connected by a common cause

John Brown was a charismatic and deeply religious man who heard the God of the Old Testament speaking to him and instructing him to destroy slavery by any means. Brown raised a band of followers to wage a deadly war against the institution.

Brown’s violence pointed Illinois lawyer Abraham Lincoln toward a different solution to slavery: politics. Many in the North viewed Brown as a martyr to liberty, while Southerners responded with anger. Lincoln shrewdly threaded the needle between the opposing voices and won the presidential election. However, Lincoln would soon see his peaceful beliefs face the ultimate test.

“Featuring the riveting narrative sweep, sharp eye for detail, and original analysis we have come to expect from H. W. Brands, The Zealot and the Emancipator vividly illuminates the convulsive battles to fulfill the long-deferred American dream of freedom for all. Along the way, Brands makes thought-provoking connections between these two extraordinary men—a revolutionary and a president—that have eluded most historians for generations. Here is a book that deserves to become foundational reading for America’s new reckoning with slavery, race, and racism.” —Harold Holzer