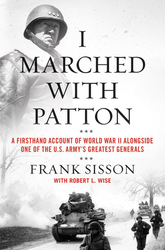 I Marched With Patton: A Firsthand Account Of World War II Alongside One Of The U.S. Army's Greatest Generals

In the footsteps of a legend

I Marched with Patton is a remarkable eyewitness account that offers priceless insights into a foot soldier’s life on the front lines during WWII under the command of General George Patton.

Born in rural Oklahoma, Frank Sisson grew up fatherless during the Great Depression. In 1944, at age eighteen, he enlisted and was deployed to France where he marched with Patton, taking part in many of the key Allied movements. Frank fought in the Battle of the Bulge, nearly died crossing the Rhine, and was among the first American soldiers who liberated the notorious Dachau concentration camp.