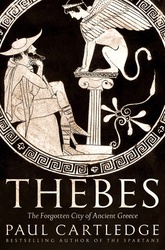 In Thebes: The Forgotten City of Ancient Greece, acclaimed classicist and historian Paul Cartledge brings the city vividly to life and argues that it is central to our understanding of the ancient Greeks’ achievements and thus to the wider politico-cultural traditions of western Europe, the Americas, and indeed the world.

From its role as an ancient political power, to its destruction at the hands of Alexander the Great, to its eventual restoration by Alexander’s successor, Cartledge deftly chronicles the rise and fall of the ancient city.