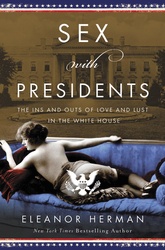 Under the covers at the White House

While Americans have a reputation for being strait-laced, many of the nation’s leaders have been anything but puritanical. Alexander Hamilton had a steamy affair with a blackmailing prostitute and John F. Kennedy swam nude with female staff in the White House swimming pool. Is it possible the qualities needed to run for president—narcissism, a thirst for power, a desire for importance--go hand in hand with a tendency for sexual misdoing?

In this entertaining and eye-opening book, Eleanor Herman revisits some of the sex scandals that have rocked the nation's capital and shocked the public, while asking the provocative questions: does rampant adultery show a lack of character or the stamina needed to run the country? Or perhaps both?