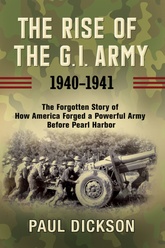 The Rise Of The G. I. Army, 1940-1941: The Forgotten Story Of How America Forged A Powerful Army Before Pearl Harbor

Release Date: July 7, 2020Due to the future release date, an order which includes this title will not ship until July 7, 2020.

The story of America’s astounding industrial mobilization during World War II has been told many times. But what has never been chronicled before Paul Dickson’s The Rise of the G. I. Army, 1940-1941 is the extraordinary transformation of America’s military from a disparate collection of camps with dilapidated equipment into a well-trained army ten times its prior size in little more than eighteen months.

From Franklin Roosevelt’s selection of George C. Marshall to be Army Chief of Staff to the massive and unprecedented mock battles in Tennessee, Louisiana, and the Carolinas; Dickson narrates America’s urgent mobilization against a backdrop of political and cultural isolationist resistance and racial tension at home.