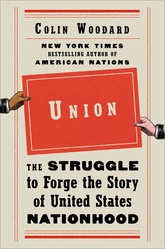 Union: The Struggle To Forge The Story Of United States Nationhood

The making of an American myth

The author of American Nations returns to the historical study of a fractured America by examining how a myth of national unity was created and fought over in the 19th century.

On one side, a small group of historians, political leaders, and novelists fashioned a history that attempted to transcend the profound differences and tensions between the nation's regional cultures. This emerging nationalist story was immediately contested by another set of intellectuals who argued that the U.S. was instead an ethno-state, the homeland of the allegedly superior "Anglo-Saxon" race.

Union tells the story of the genesis and epic confrontations between these visions of our nation's path and purpose through the lives of the key figures who created them.