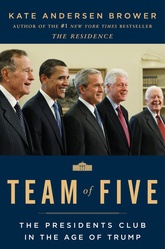 Team of Five: The Presidents Club in the Age of Trump

Life after the White House

After serving as president of the U.S., five men--Jimmy Carter, the late George H.W. Bush, Bill Clinton, George W. Bush, and Barack Obama--became members of the world’s most exclusive fraternity. In Team of Five, Kate Andersen Brower uncovers what, exactly, comes after the presidency, offering a glimpse into the complex relationships of these five former presidents, and how each of these men views his place in a nation that has been changed by President Donald Trump.

With an empathetic yet critical eye and firsthand testimony from the Carters, Donald Trump, top aides, friends, and family members of the former presidents, Team of Five takes us inside the exclusive world of these powerful men and their families.