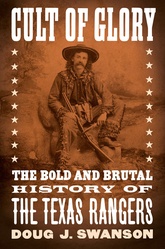 Cult Of Glory: The Bold And Brutal History Of The Texas Rangers

The reality of the Texas Rangers

A twenty-first century reckoning with the legendary Texas Rangers that does justice to their heroic moments, while also documenting atrocities, brutality, oppression, and corruption.

The Texas Rangers came to life in 1823, when Texas was still part of Mexico. Nearly 200 years later, the Rangers are still going—one of the most famous of all law enforcement agencies. In Cult of Glory, Doug J. Swanson has written a sweeping account of the Rangers that chronicles their epic, daring escapades, while showing how the white and propertied power structures of Texas used them as enforcers, protectors and officially sanctioned killers. It also reveals how legends of the American West—the real and the false—are truly made.