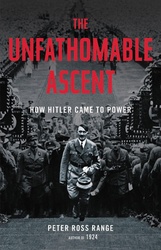 The Unfathomable Ascent: How Hitler Came To Power

On the night of January 30, 1933, Adolf Hitler leaned out of a window of the Reich chancellery in Berlin, bursting with joy. After an improbable political journey that came close to faltering on many occasions, his march to power had finally succeeded.

While the path of Hitler's rise has been told in books covering larger portions of his life, no previous work has focused solely on his eight-year climb to rule: 1925-1933. Renowned author Peter Ross Range brings this period back to startling life with a narrative history that describes brushes with power, quests for revenge, nonstop electioneering, American-style campaign tactics, and—for Hitler—moments of gloating triumph followed by abject humiliation.