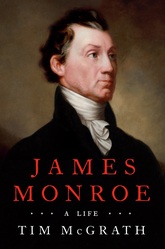 The remarkable life of a legendary leader

James Monroe lived a life defined by revolutions. From the War for Independence, to his ambassadorship in Paris in the days of the guillotine, to his own role in the creation of Congress's partisan divide, he embodied the restless spirit of the age.

This magnificent new biography vividly recreates the epic sweep of Monroe’s life: his near-death wounding at Trenton; his pivotal negotiations with France over the Louisiana Purchase; and Monroe’s lifelong struggle to reckon with his own complicity in slavery. As the fifth president of the U.S., Monroe transformed the nation, strengthening American power both at home and abroad.

Author Tim McGrath has delivered a fascinating portrait of an essential American statesman and president.