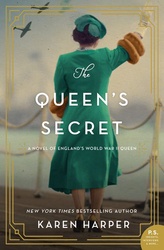 The Most Dangerous Woman in Europe

It’s 1939. As the wife of the King George VI and the mother of the future queen, Elizabeth—“the queen mother—shows a warm, smiling face to the world. But it’s no surprise that Hitler himself calls her the “Most Dangerous Woman in Europe.” For behind that kindly demeanor is a will of steel.

Two years earlier, George was thrust onto the throne when his brother Edward abdicated, determined to marry his divorced, American mistress Mrs. Simpson. Vowing to do whatever it takes to make her husband’s reign a success, Elizabeth endears herself to the British people, and prevents the former king and his brazen bride from ever again setting foot in Buckingham Palace.