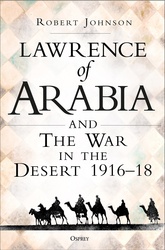 Lawrence of Arabia on War: The Campaign in the Desert 1916–18

A legacy of war and peace

A century ago, Captain Lawrence and an unlikely band of Arab irregulars captured the strategic port of Aqaba after an epic journey through waterless tracts of desert. Their attacks on railways during the Great War have become the stuff of legend. While Lawrence has been the subject of many biographies, as well as an award-winning film, the context of his war in the desert, and his ideas on war itself, are less well known.

This new study offers a high-paced evaluation of T. E. Lawrence and the British military operations in the Near East. It revises and adds to conventional narratives in order to tell the full story of this influential figure, as well as the Ottoman-Turkish perspective, and the Arabs' position, within the context of the war.