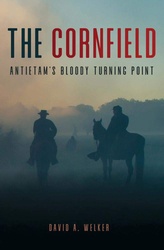 The Cornfield Of Antietam: The Civil War's Bloody Turning Point

by David A. Welker

Antietam is forever burned into the American psyche, a Civil War battle bathed in blood that served no military purpose and brought no decisive victory. This much Americans know. What they didn't know is why this is so—until now.

The Cornfield tells for the first time the full story of the historic battle. Many of the included firsthand accounts have never been revealed to modern readers and never assembled in such a comprehensive, readable form. This superb work offers new perspectives that may be controversial—particularly to those who accept unchallenged the views of the battle's first historians—but which are certain to change modern understanding of how the battle of Antietam was fought and its role in American history.