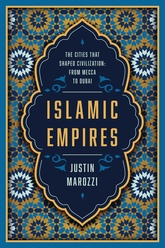 Islamic Empires: The Cities that Shaped Civilization From Mecca to Dubai

Islamic civilization was once the envy of the world. From a succession of glittering, cosmopolitan capitals, Islamic empires lorded it over the Middle East, North Africa, Central Asia and swathes of the Indian subcontinent, while Europe cowered feebly at the margins. For centuries the caliphate was both ascendant on the battlefield and triumphant in the battle of ideas, its cities unrivaled powerhouses of artistic grandeur, commercial power, and spiritual sanctity.

Islamic Empires is a history of this rich and diverse civilization told through its greatest cities over the fifteen centuries of Islam, from its earliest beginnings in Mecca in the seventh century to the astonishing rise of Doha in the twenty-first.