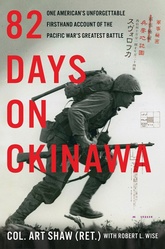 On Easter Sunday, April 1, 1945, 1.5 million men gathered aboard 1,500 Allied ships off the coast of the Japanese island of Okinawa. The first American officer ashore was then-Major Art Shaw. For the next three months, Shaw and his men served near the front lines of the Pacific’s costliest battle, their artillery proving decisive against a phantom enemy who had entrenched itself in the rugged, craggy island.

Filled with extraordinary details, Shaw’s gripping account gives lasting testimony to the courage displayed by so many on the hills of Okinawa.