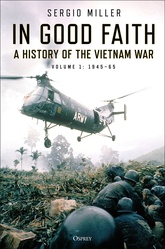 A definitive new history of the Vietnam War

In Good Faith is the first book of a highly detailed yet accessible, two-volume narrative history of America's involvement in Vietnam, from the end of World War II to the Fall of Saigon in 1975. Drawing on the latest research and recently declassified NSA material, Sergio Miller has been able to chronicle the entire conflict with resources unavailable to the authors of classic Vietnam histories

This captivating first book of the series begins with the surrender of Japan in 1945 through America’s involvement in the French Indochina War and the initial advisory missions that followed. It finishes at the climax of one of those operations, Rolling Thunder, and just prior to the first commitment of U.S. ground forces in the spring of 1965.