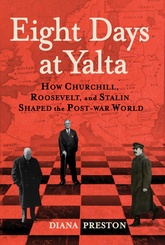 Eight Days At Yalta: How Roosevelt, Churchill, And Stalin Shaped The Post-War World

The meeting that reimagined the world

While some of the last battles of WWII were being fought, U.S. President Franklin Roosevelt, British Prime Minister Winston Churchill, and Soviet Premier Joseph Stalin met in the Crimean resort town of Yalta. Over eight days of bargaining and bombast, they decided on the endgame of the war against Nazi Germany, the constitution of the nascent United Nations, the price of Soviet entry into the war against Japan, the new borders of Poland, and even more.

With the deep insight of a skilled historian, drawing on the memorable accounts of those who were there, Diana Preston has crafted a masterful and vivid chronicle of the conference that created the post-war world, out of which came decisions that still resonate loudly today.