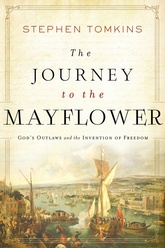 The Journey Of The Mayflower: God's Outlaws And The Invention Of Freedom

Release Date: February 4, 2020Presales available for members only. To purchase this title, please log in or join now.

The storm before the journey

This year is the 400th anniversary of the sailing of the Mayflower—the ship that took the Pilgrim Fathers to the New World. It is a foundational event in American history, but it began as an English story, which pioneered the idea of religious freedom. The illegal underground movement of Protestant separatists from Elizabeth I’s Church of England is a tale of subterfuge and danger, arrests and interrogations, prison and executions.

Historian Stephen Tomkins tells this fascinating story—one that is rarely told as an important piece of English, as well as American, history—that is full of contemporary relevance: religious violence, the threat to national security, freedom of religion, and tolerance of dangerous opinions.