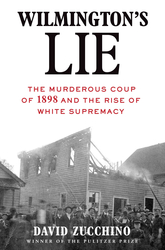 Wilmington's Lie: The Murderous Coup Of 1898 And The Rise Of White Supremacy

Igniting the flames of white supremacy

A searing account of the Wilmington riot and coup of 1898, an extraordinary event unknown to most Americans.

By the 1890s, Wilmington, North Carolina, was a shining example of a mixed-race community. It was a bustling port city with a burgeoning African American middle class and a Fusionist government of Republicans and Populists that included black aldermen, police officers, and magistrates. But across the state―and the South―white supremacist Democrats were working to reverse the advances made by former slaves and their progeny.