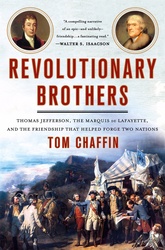 Thomas Jefferson and the Marquis de Lafayette shared a singularly extraordinary friendship, one involved in the making of two revolutions—and two nations. Jefferson first met Lafayette in 1781, when the young French-born general was dispatched to Virginia to assist Jefferson in fighting off the British. The charismatic Lafayette, hungry for glory, could not have seemed more different from Jefferson, the reserved statesman. But when Jefferson, a newly appointed diplomat, moved to Paris three years later, speaking little French and in need of a partner, their four-decade friendship began