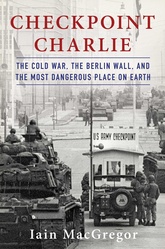 Checkpoint Charlie: The Cold War, The Berlin Wall, and the Most Dangerous Place On Earth

In the shadow of the Berlin Wall

A groundbreaking history of Checkpoint Charlie, the famous military gate on the border of East and West Berlin, where the United States confronted the USSR during the Cold War.

Author Iain MacGregor captures the essence of the oppression, paranoia, and fear that gripped the world throughout this era. Checkpoint Charlie is about the nerve-wracking confrontation between the West and USSR, highlighting such important global figures as Eisenhower, Stalin, JFK, Khrushchev, Nixon, Reagan, and others. MacGregor also includes interviews with the men who built and dismantled the Wall; children who crossed it; relatives who lost loved ones trying to climb it; and many more, whose living memories contributed to the full story of Checkpoint Charlie.