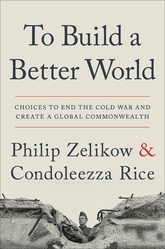 To Build A Better World: Choices To End The Cold War And Create A Global Commonwealth

by Philip Zelikow and Condoleezza Rice

The dream of unity

Two of America's leading scholar-diplomats, Philip Zelikow and Condoleezza Rice, have combed sources in several languages, interviewed leading figures, and drawn on their own firsthand experience to bring to life the choices that molded the contemporary world. Beginning in the late 1970s and carrying into the present, they focus on the momentous period between 1988 and 1992, when an entire world system changed, states broke apart, and societies were transformed.

To Build a Better World is an authoritative depiction of contemporary statecraft. It lets readers in on the strategies and negotiations, nerve-racking risks, and deep deliberations behind the dramas that changed the face of Europe—and the world—forever.