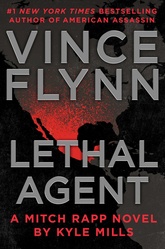 A toxic presidential election is underway in an America already badly weakened by internal divisions. While politicians focus entirely on maintaining their own power and privilege, ISIS kidnaps a brilliant French microbiologist and forces him to begin manufacturing anthrax.

ISIS recruits a Mexican drug cartel to smuggle the bioweapon across the border, but it’s really just a diversion. The terrorist organization needs to keep Mitch Rapp and Irene Kennedy distracted long enough to weaponize a deadly virus that they stumbled upon in Yemen. If they succeed, they’ll trigger a pandemic that could rewrite the world order.

On his own, Rapp embarks on a mission to infiltrate the cartels and track down the ISIS leader before it’s too late.