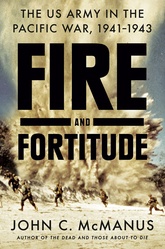 A powerful portrait of the U.S. Army in the Pacific

John C. McManus, one of our most highly acclaimed historians of World War II, takes readers from Pearl Harbor—a rude awakening for a ragtag militia woefully unprepared for war—to Makin, a sliver of coral reef where the Army was tested against the increasingly desperate Japanese. In between were nearly two years of punishing combat as the Army transformed, at times unsteadily, from an undertrained garrison force into an unstoppable juggernaut, and America evolved from an inward-looking nation into a global superpower.

This is an essential, ambitious book, the first of two volumes, a compellingly written and boldly revisionist account of a war that reshaped the American military and the globe, and continues to resonate today.