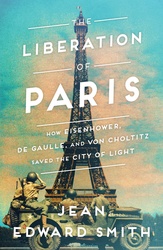 The Liberation Of Paris: How Eisenhower, de Gaulle, And von Choltitz Saved the City Of Light

Saving the City of Lights

Prize-winning and bestselling historian Jean Edward Smith tells the dramatic story of the liberation of Paris during World War II—a triumph that was achieved through the remarkable efforts of Americans, French, and Germans, all racing to save the city from destruction.

In The Liberation of Paris, Jean Edward Smith puts this dramatic event in context, showing how the decision to free the city came at a heavy price: it slowed the Allied momentum and allowed the Germans to regroup. After the war, German generals argued that Eisenhower’s decision to enter Paris prolonged the war for another six months. Was Paris worth this price? Smith answers this question in his superb history of one of the great events of World War II.