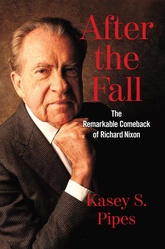 After The Fall: The Remarkable Comeback Of Richard Nixon

From exile to elder statesman

Only a decade after fleeing the White House in disgrace, Richard Nixon became a trusted advisor to presidents, dispensing wisdom on campaign strategy and foreign policy, and representing the United States at state funerals—the very model of an elder statesman.

How did he do it? Nixon leveraged his still sharp mind, his peerless political instincts, his deep connections with foreign leaders—but, above all, his stubborn refusal to accept defeat—to achieve a political restoration as astonishing as the fall that preceded it.

Kasey S. Pipes, advisor to President George W. Bush, tells the fascinating story of Nixon’s comeback and reveals inside information about Nixon’s successful campaign to repair his reputation and resuscitate his career.