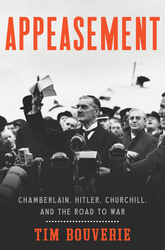 Appeasement: Chamberlain, Hitler, Churchill And The Road To War

In September 1938, Neville Chamberlain announced that his visit to Hitler had averted the greatest crisis in recent memory. It was, he later assured the crowd in Downing Street, “peace for our time.” Less than a year later, Germany invaded Poland and the Second World War began.

Drawing on deep archival research, including previously unseen sources, this is an unforgettable portrait of the ministers, aristocrats and amateur diplomats who, through their actions and inaction, shaped their country's policy and determined the fate of Europe.

Sweeping and intimate, this book is not only eye-opening history but a timeless lesson on the challenges of standing up to authoritarianism—and the calamity that results from failing to do so.