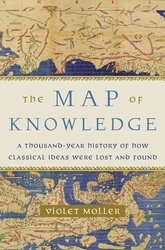 The Map Of Knowledge: A Thousand-Year History Of How Classical Ideas Were Lost And Found

Great ideas of the ancient world were lost and found

The foundations of modern knowledge laid by the Greeks were written on scrolls and stored in libraries across the Mediterranean and beyond. Christianity cast a shadow over so-called pagan thought, books were burned, and the library of Alexandria, the greatest repository of classical knowledge, was destroyed.

Yet some texts did survive and The Map of Knowledge explores the role played by seven cities around the Mediterranean—rare centers of knowledge in a dark world, where scholars supported by enlightened heads of state collected, translated and shared manuscripts—and also follows three key texts—Euclid's Elements, Ptolemy's The Almagest, and Galen's writings on medicine—on a perilous journey driven by insatiable curiosity.

“The Map of Knowledge is an endlessly fascinating book, rich in detail, capacious and humane in vision.” -Stephen Greenblatt, author of The Swerve: How the World Became Modern, winner of the Pulitzer Prize

“A lovely debut from a gifted young author. Violet Moller brings to life the ways in which knowledge reached us from antiquity to the present day in a book that is as delightful as it is readable.” -Peter Frankopan, author of The Silk Roads

“Superb . . . Ambitious but concise, deeply researched but elegantly written, and very entertaining, The Map of Knowledge is popular intellectual history at its best.” -Tim Smith-Laing, The Telegraph (UK)

“Euclid’s Elements is the seed from which my subject of mathematics grew. Thanks to this fascinating and meticulous account, I’ve had a glimpse of just how Euclid’s text, together with works by Ptolemy and Galen, blossomed as they wound their way through the centuries and the seven cities at the heart of Violet Moller’s book. What an adventure.” -Marcus du Sautoy, professor of mathematics at the University of Oxford and author of The Music of the Primes

“An epic treasure hunt into the highways and byways of stored knowledge across faiths and continents.” -John Agard, poet and judge, Royal Society of Literature 2016 Jerwood Award