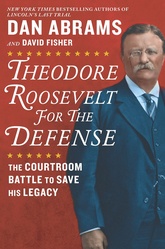 Theodore Roosevelt For The Defense: The Courtroom Battle To Save His Legacy

The fight for Roosevelt’s political legacy

The bestselling authors of Lincoln’s Last Trial take readers inside the courtroom to witness the epic 1915 case in which Theodore Roosevelt, weighing one last presidential run, defended his integrity and challenged the political system.

Roosevelt had accused his former friend and ally, now turned rival, William Barnes of political corruption. The furious Barnes responded by suing Roosevelt for an enormous sum that could have financially devastated him.

Following the case through court transcripts, news reports, and other primary sources, Dan Abrams and David Fisher present a high-definition picture of the American legal system during the Great War, with its former president fighting for the ideals he held dear.