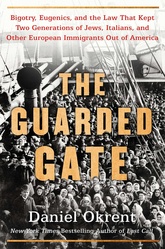 The Guarded Gate: Patricians, Eugenicists, And The Crusade To Keep Jews, Italians, And Other Immigrants Out Of America

Capturing a forgotten chapter of American history, The Guarded Gate tells the story of the scientists who argued that certain nationalities were inherently inferior, providing the intellectual justification for the harshest immigration law in our country’s history. Brandished by the upper class Bostonians and New Yorkers—many of them progressives—who led the anti-immigration movement, the eugenic arguments helped keep hundreds of thousands of Jews, Italians, and others out of the US for more than 40 years.

A work of history relevant for today, this insightful book painstakingly connects American eugenicists to the rise of Nazism, and shows how their beliefs found fertile soil in the minds of citizens and leaders both here and abroad.

“What’s so unsettling about Daniel Okrent’s spellbinding history of a previous immigration controversy is how it resonates with today’s debate. Insightful, unsparing, and totally absorbing, this book frames the discussion against a compelling historical backdrop that describes the gap between the American ideal and the American reality.”-Lawrence Wright, author of The Looming Tower and God Save Texas