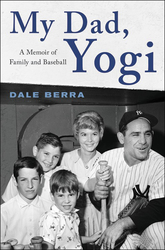 My Dad, Yogi: A Memoir Of Family And Baseball

Get to know a hall-of-fame father

Everyone knows Yogi Berra, the American icon. He was the backbone of the New York Yankees through ten World Series Championships, managed the National League Champion New York Mets in 1973, and his inscrutable Yogi-isms remain an indelible part of our lexicon. But no one knew him like his family did. My Dad, Yogi is Dale Berra's story of his unshakeable bond with his father, as well as a unique and intimate perspective on one of the great sports figures of the 20th Century.

Dale chronicles—as only a son could—his family's history, his parents' enduring relationship, and his father’s legendary career. Dale also bravely shares his past struggles with addiction and how his father’s love ultimately saved his life.