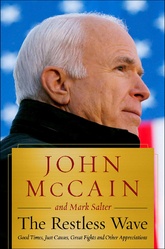 McCain takes the gloves off

In a time when America is more polarized than it has been for decades, John McCain is the rare public figure who has earned respect from both sides of the aisle. His words are more important today than ever.

The Restless Wave begins with McCain’s 2008 presidential campaign and follows the senator during his time as a senior Republican through the Obama administration. McCain shares his experiences during the divisive 2016 election and offers a no-holds-barred assessment of the outcome. And he offers an urgent look at myriad challenges from abroad, from Russia to ISIS to our ongoing operations in Iraq and Afghanistan.

Candid, pragmatic, and always engaging, John McCain holds nothing back in what is sure to be a landmark political memoir.