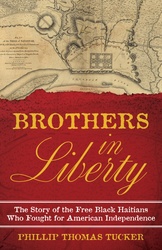 An untold story of unity

Brothers in Liberty tells the story of the Chasseurs, the largest Black military unit in the American Revolution. In the fall of 1779, this force joined the attack on the British at Savannah in a series of frontal results. The French and Americans were repulsed at great cost in lives, but the free Black Haitians stood their ground and stymied a counterattack that salvaged the day for the Americans and French.