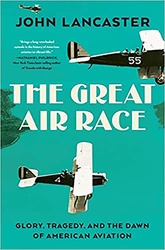 The untold story of a landmark air race

Years before Charles Lindbergh’s flight from New York to Paris electrified the nation, a group of daredevil pilots, most of them veterans of World War I, brought aviation to the masses by competing in the sensational transcontinental air race of 1919. The contest awakened Americans to the practical possibilities of flight, yet despite its significance, it has until now been all but forgotten.

In The Great Air Race, journalist and amateur pilot John Lancaster finally reclaims this historic event and the unheralded aviators who competed to be the fastest man in America. A thrilling tale of men and their machines, this almost unbelievable true story offers a new origin point for commercial aviation in the United States.