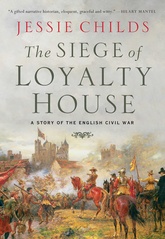 The Siege of Loyalty House

Caught in the crossfire

It was a time of puritans and populism, witch hunts and civil war. Between 1643 and 1645, Basing House in Hampshire, England, was besieged three times. Its owner, the Marquess of Winchester, refused all terms of surrender. As royalist strongholds crumbled around the country, the Winchesters--and Basing House--stood firm. The famed architect Inigo Jones designed fortifications; gamekeepers became snipers; and the women hurled bricks at the besiegers. "Loyalty House," as it was known, became the king's principal garrison.

The Siege of Loyalty House tells the story of these dramatic events, not only recounting the skirmishes, but the experiences of the men, women, and children who struggled to survive the English Civil War.