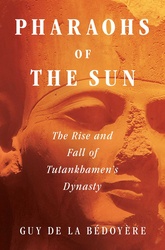 Pharaohs of the Sun

From 1550 BC to 1295 BC, Egypt was ruled by the most powerful, successful, and richest dynasty of kings in its long and epic history. They included the female king Hatshepsut, the warrior kings Thutmose III and Amenhotep II, the religious radical Akhenaten and his queen, Nefertiti, and most famously of all, the short-lived boy king, Tutankhamun. This was an age of ruthless absolutism, exploitation, extravagance, brutality, and oppression in a culture where not only did Egypt plunder its neighbors, but Egyptian kings robbed one another.

Pharaohs of the Sun is the story of Egypt's famed rulers, showing how their glamor and gold became tainted by selfishness, ostentation, and the systematic exploitation of their people and enemies.