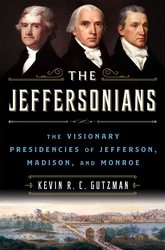 The reign of the Virginia Dynasty

Before the consecutive two-term administrations of Presidents Bill Clinton, George W. Bush, and Barack Obama, there had only been one other trio of its type: Thomas Jefferson, James Madison, and James Monroe. These three political allies were tightly related: Jefferson and Madison were the closest of friends, and Monroe was Jefferson’s former law student.

With over 600 pages, Kevin R. C. Gutzman’s The Jeffersonians is a complete chronicle of the men, known as The Virginia Dynasty, who served as president from 1801 to 1825. This insightful book details their triumphs and failures, in addition to exploring a time in America when three presidents worked toward common goals to strengthen our Republic in a way we rarely see in politics today.