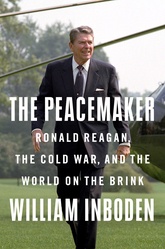 With decades of hindsight, the peaceful end of the Cold War seemed like a foregone conclusion. But in the early 1980s, most experts believed the Soviet Union was strong, stable, and would last into the next century. Ronald Reagan entered the White House with no certainty of what would happen next, only an overriding faith in democracy and an abiding belief that Soviet communism—and the threat of nuclear war—must end.

The Peacemaker reveals how Reagan’s White House waged the Cold War, while managing multiple crises around the globe. Based on thousands of pages of newly-declassified documents and interviews with senior Reagan officials, this powerful book brims with fresh insights into one of America’s most consequential presidents.