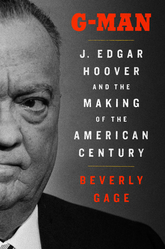 The man behind the badge

We remember J. Edgar Hoover as a bulldog—squat frame, bulging wide-set eyes, fearsome jowls—but in 1924, when he became director of the FBI, he was a trim wunderkind, buzzing with energy and big ideas for reform. He transformed a failing law-enforcement backwater, riddled with scandal, into a modern machine.

Beverly Gage’s monumental work, featuring more than 800 pages, explores the full sweep of Hoover’s life and career. G-Man places Hoover back where he once stood in American political history—not at the fringes, but at the center—and uses his story to explain the trajectories of governance, policing, race, ideology, political culture, and federal power as they evolved over the course of the 20th century.