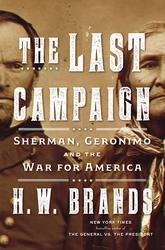 The final fight for the American West

William Tecumseh Sherman was a privileged son of Ohio who attended West Point and rose to prominence through his scorched earth campaigns in the Civil War. Geronimo grew up in the Apache tribe, hunting wild game for survival and roaming freely on the land. They were both keen strategists and bold soldiers, ruthless with their enemies. Over the course of the 1870s and 1880s, these two war chiefs would confront each other in a bloody battle for what the American West would be: a sparsely settled, wild home where Indian tribes could thrive, or a densely populated extension of the America to the east of the Mississippi.

The Last Campaign is the searing story of the Indian Wars and the final fight for control of the American continent.