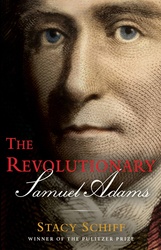 An icon of American independence

Thomas Jefferson asserted that if there was any leader of the Revolution, “Samuel Adams was the man.” With high-minded ideals and bare-knuckle tactics, Adams led what could be called the greatest campaign of civil resistance in American history.

With The Revolutionary: Samuel Adams, Pulitzer Prize-winning biographer Stacy Schiff returns Adams to his seat of glory, introducing us to the shrewd and intensely disciplined man who supplied the moral backbone of the American Revolution. A singular figure at a singular moment, Adams packaged and amplified the Boston Massacre. He helped to mastermind the Boston Tea Party. He rallied a town, a colony, and eventually a band of colonies behind him, creating the cause that created a country.