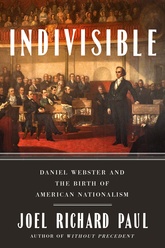 The founding of America's identity

In Indivisible, author Joel Richard Paul tells the story of how Daniel Webster, a young New Hampshire attorney turned politician, rose to national prominence through his powerful oratory and unwavering belief in the United States.

As the greatest orator of his age, Webster saw his speeches and writings published widely, and his stirring rhetoric convinced Americans to see themselves differently, as a nation bound together by a government of laws, not parochial interests. As these ideas took root, they influenced future leaders, among them Abraham Lincoln, who drew on them to hold the nation together during the Civil War.

Indivisible is both a compelling history and a fascinating account of one of the founders of our national perspective.