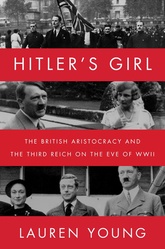 Hitler’s Girl is a groundbreaking history that reveals how, in the 1930s, authoritarianism nearly took hold in Great Britain as it did in Italy and Germany. Drawing on recently declassified intelligence files, author Lauren Young details the pervasiveness of Nazi sympathies among the British aristocracy. She reveals how these aristocrats formed a murky Fifth Column to Nazi Germany, which depended on the complacence and complicity of the English to topple its proud and long-standing democratic tradition--and very nearly succeeded.

Eye-opening and instructive, Hitler’s Girl re-evaluates 1930s England to help us understand our own vulnerabilities and poses urgent questions we must face to protect our freedom.