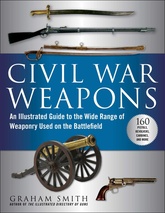 An explosive history of weapons

More than three million Americans fought in the Civil War and over six hundred thousand died. Its impact is still felt today, for the war shaped our nation, and our national character. Studying the weapons used by North and South tells an intriguing story of its own.

The well-equipped Union army had access to the best of the industrial North's manufacturing output. By contrast, the South had to get by with imported arms and locally made copies of patented weapons. But the pressure of war quickly led to improvements in firearms. A war that began with single-shot horse pistols ended with multi-shot revolvers.