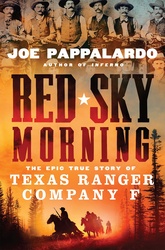 Blood and justice in the Wild West

Between 1886 and 1888, Sergeant James Brooks of Texas Ranger Company F was engaged in three fatal gunfights, endured disfiguring bullet wounds, was convicted of second-degree murder, and rattled Washington, D.C. with a request for a pardon from the president. His story anchors Red Sky Morning, an epic saga of lawmen and outlaws set in Texas during the waning years of the Old West.

While Brooks and Company F hunted criminals across Texas and beyond, they met their match in the Conners, a family of master hunters and jailbreakers who were wanted for their part in a bloody feud. Now, the full story of Company F’s showdown with the Conner family is finally being told, with long dead voices being heard for the first time.