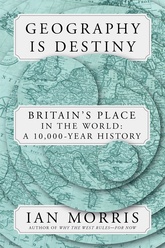 Geography Is Destiny: Britain And The World: A 10,000 Year History

The evolution of a global superpower

For its first seventy-five hundred years, Britain was never more than a bit player at the western edge of a European stage. By 1500 CE, however, new kinds of ships and governments had turned the European stage into an Atlantic one. With the English Channel now functioning as a barrier, England transformed the British Isles into a United Kingdom that created a worldwide empire. Since 1900, however, thanks to rapid globalization, Britain has been overshadowed by American, European, and--increasingly--Chinese actors.

In Geography is Destiny, author Ian Morris charts Britain's geopolitical fortunes over thousands of years. But as power and wealth shift from West to East, does Britain's future lie with Europe or the wider world?